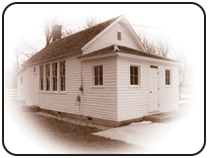 Born in Kentucky in 1840, Beard lived the life of a slave until early in the Civil War. In 1862, when the Northern army gained control of most of Kentucky, Henry was given his freedom.

As would become increasingly apparent in the coming years, Beard, like all newly freed blacks, was hard-pressed to find work and start a new life.  Henry Beard was fortunate.  The conquering union regiment stationed in his part of Kentucky, the 105th Illinois, was from the DeKalb-Sycamore area.  Their commander hired Henry to work as a laborer, but he was eventually chosen to serve as under cook for the adjutant general of the army in command of that portion of the western theatre of war.

Sometime after the war, Henry decided to follow his original regimental commander to his home town Sycamore, and start his new life.  Beard was, as reported in 1924 by the Sycamore True Republican in a story about his life, “the original colored citizen of Sycamore.”  He settled north of town, in the area then called the “North Woods,” where he purchased five acres of land from local abolitionist, David West.

Henry was married to Julia (Judy) Jones.  Together they built a two-room house and they raised 14 children.  He was unable to read or write but wanted his children to be educated.  The Beards sent their sons to the only school in the area, North Grove School, a one-room schoolhouse where the language of the local settlers was Swedish.  Thus in order to learn reading, writing and arithmetic, the Beard children had to first understand the teacher, who spoke only Swedish.

The children and grandchildren all eventually moved out of the area.  Judy outlived Henry by 22 years.  She eventually moved into town and made her home on North Avenue, still today a tight-knit community where many African Americans live and attend church.

Recently the descendents of one of the Beard children made their way from Detroit to see the schoolhouse where their grandfather was educated.  Members of four generations of Henry and Judy’s son, Raymond, travelled to celebrate the North Grove School Association’s fourth annual North Grove School Days.  Not only did they get to see the school and meet the descendents of other school attendees, they were provided a bus tour arranged by the City of Sycamore and the NGSA.  The visiting members of the Beard family were able to see the original five acre farm where they had settled.  They travelled to the Fairview Cemetery in DeKalb, where their grandmother Judy was buried 1942.  Also, the Sycamore History Museum and the Sycamore Library provided programs and exhibits for the Beard family to learn more about their ancestors.